You are here: Home / Black and White / The Liberty Bell by E. S. Brooks

SQUARELY prim and stoutly built,
Free from glitter and from gilt,
Plain, – from lintel up to roof-tree and to belfry
bare and brown –

Stands the Hall that hot July, –
While the folk throng anxious by, –
Where the Continental Congress meets within
the Quaker town.

Hark! a stir, a sudden shout,
And a boy comes rushing out,
Signaling to where his grandsire in the belfry,
waiting, stands; –

“Ring!” he cries; “the deed is done!
Ring! they’ve signed, and freedom’s won!”
And the ringer grasps the bell-rope with his strong
and sturdy hands;

While the bell, with joyous note
Clanging from its brazen throat,
Rings the tidings, all-exultant, – peals the news
to shore and sea:

“Man is man – a slave no longer;
Truth and Right than Might are stronger,
Praise to God! We’re free; we’re free!”

TRIUMPH of the builder’s art,
Tower and turret spring and start –
As if reared by mighty genii for some Prince of
Eastern land;

Where the Southern river flows,
And eternal summer glows, –
Dedicate to labor’s grandeur, fair and vast the
arches stand.

And, enshrined in royal guise,
Flower-bedecked ‘neath sunny skies;
Old and time-stained, cracked and voiceless, but
where all may see it well;

Circled by the wealth and power
Of the great world’s triumph-hour, –
Sacred to the cause of freedom, on its dais rests
the Bell.

And the children thronging near,
Yet again the story hear
Of the bell that rang the message, pealing out
to land and sea:

“Man is man – a slave no longer;
Truth and Right than Might are stronger.
Praise to God! We’re free; we’re free!”

Prize the glorious relic then,
With its hundred years and ten,
By the Past a priceless heirloom to the Future
handed down.

Still its stirring story tell,
Till the children know it well, –
From the joyous Southern city to the Northern
Quaker town.

Time that heals all wounds and scars,
Time that ends all strifes and wars,
Time that turns all pains to pleasures, and can
make the cannon dumb,

Still shall join in firmer grasp,
Still shall knit in friendlier clasp,
North and South-land in the glory of the ages
yet to come.

And, though voiceless, still the Bell
Shall its glorious message tell,
Pealing loud o’er all the Nation, Lake to Gulf,
and Sea to Sea:

“Man is man – a slave no longer;
Truth and Right than Might are stronger.
Praise to God! We’re free; we’re free!” 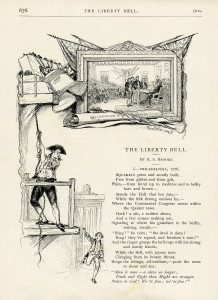 These pages, featuring the poem, The Liberty Bell, by E. S. Brooks with beautiful corresponding patriotic art, are from the July 1885 issue of St. Nicholas magazine. 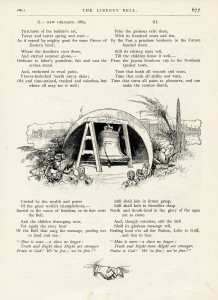 Here are black and white clip art versions of the images from the pages. 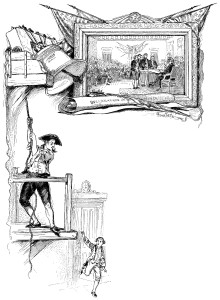 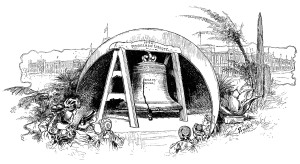