You are here: Home / Random Musings / Austin’s Surgery is Over!

Austin’s new heart is in and working well! When the surgeons went in to operate, they discovered that there hadn’t actually been enough room in Austin’s chest for the LVAD and the device had fused to Austin’s left lung. They had some difficulty stopping the bleeding when they removed it and kept Austin in the OR some extra time until the bleeding was under control.

Austin’s teenage siblings have been at the hospital today, along with several other family members. I’ve been home with the two younger siblings and it’s been a long day waiting for my daughter’s phone call. I know it’s been a long day for all of the family and friends of the family as well, no matter where they are, and I am so thankful that this gigantic step of Austin’s recovery is complete.

My daughter took this picture as Austin was being taken to PICU from the OR about 35 minutes ago (approximately 6:30 p.m.). 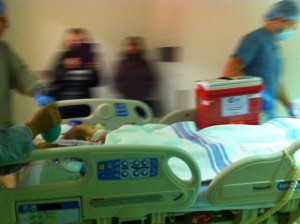 Your continued prayers for Austin’s full recovery are appreciated so much more than I have words to adequately express. ♥

« Austin Going to the OR
Free Vintage Images ~ An Island Fable »