You are here: Home / Random Musings / Austin, an Update

After my grandson, Austin, had a stroke on December 13th and the procedure to remove the blood clot in his brain was complete, he was moved back to PICU to be closely monitored. A CT scan on December 15th showed several small areas of damage on the right side of Austin’s brain and because he has to be anticoagulated while on the VAD (Ventricular Assist Device), there was a risk of bleed in those areas. On December 16th the doctors thought Austin’s VAD may have another clot and they began treatment by increasing the dose of Heparin Austin was on but that also increased the risk of bleed in the damaged areas of his brain.

On December 16th Austin began to have diarrhea and was vomiting a lot. On December 17th the doctors said they were concerned that Austin may have an ulcer because there was blood in his vomit the previous night. Test results, including endoscopy, on December 18th showed that Austin had superficial tears in the lining of his stomach and doctors suspected those tears were caused from Austin throwing up so much. More importantly, the test results showed that Austin had a bacterial infection (C. diff). Treatment with antibiotics started immediately and Austin was moved to PICU isolation, where his doctors expected he would remain for two weeks.

On December 19th, a decision was made by Austin’s main doctor to move him out of PICU and back into an isolated room on the regular pediatric ward under ICE care. A nurse will with be him at all times while he is in isolation.

Austin is recovering from the effects of his stroke a little more each day. He walked a short distance yesterday, December 20th. Although Austin has not regained 100% movement in the side of his body affected by the stroke and has some difficultly with parts of his memory, the neurologists who are caring for him expect a full recovery.

Another CT scan was done on December 20th. Thankfully, it showed that no bleed has occurred in Austin’s brain (risk of bleed is significantly reduced 7-21 days (doctors opinions differ) after stroke). Austin will be in isolation over Christmas but his room is much more comfortable than the isolation room in PICU. He even has a small table-top Christmas tree and a few decorations.

I have out-of-town family arriving on Saturday to spend Christmas with us although none of us are really sure what Christmas will be like this year and probably won’t know until the day arrives. I am planning to prepare our traditional turkey dinner but we may also spend part of the day at the hospital.  I’ll be taking care of Austin’s siblings for most of their Christmas school vacation (they arrive this afternoon). For these reasons, my posts may be sporadic for the next couple of weeks.

I have been sick with a head cold this week and haven’t been to the hospital to visit but my daughter assures me that Austin is in good spirits. When I am well, I’ll visit Austin and take an updated picture of him. The most recent picture I have is this one that my daughter took in PICU on December 15th. 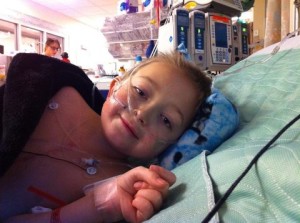 We still have lots of hope and your continued prayers for Austin’s continued healing are precious beyond words. Thank you.

Edited: to add this picture of Austin that my daughter sent to me this afternoon (Dec 21st). He’s very pleased with his new teddy bear that he received from Santa, who visited the hospital today. 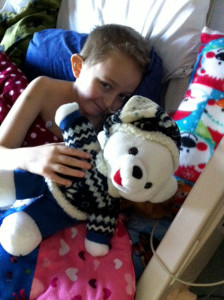 If you’re new to my blog and you’re unfamiliar with Austin’s story, I’ve included links (in the first paragraph) to previous blog posts I’ve written since Austin got sick in November. Until that time he was a perfectly healthy little boy who turned 8 in October.