You are here: Home / Gallery / Alice in Wonderland Book Page

This vintage book page features an illustration of the courtroom scene from the Alice in Wonderland story. The following is a short excerpt from the chapter titled “Who Stole the Tarts?” that describes the scene:

The King and Queen of Hearts were seated on their throne when they arrived, with a great crowd assembled about them – all sorts of little birds and beasts, as well as the whole pack of cards: the Knave was standing before them, in chains, with a soldier on each side to guard him; and near the King was the White Rabbit, with a trumpet in one hand, and a scroll of parchment in the other. In the very middle of the court was a table, with a large dish of tarts upon it: they looked so good, that it made Alice quite hungry to look at them – “I wish they’d get the trial done,” she thought, “and hand round the refreshments!” But there seemed to be no chance of this, so she began looking at everything about her to pass away the time. 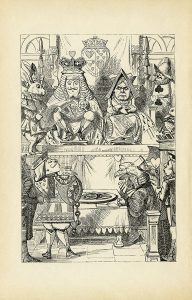 I scanned the original page from Alice’s Adventures in Wonderland by Lewis Carroll, illustrated by John Tenniel. The book was published in 1885.

Raggedy Ann Gets a Haircut