Here are two clip art illustrations that feature Victorian girls’ fashion for the summer of 1900.

The first illustration is referred to as a Children’s Blouse Suit.A description from the magazine includes, “This natty little suit is stylishly and serviceably made of white serge trimmed with narrow blue braid and fancy buttons. The large sailor collar is of dark blue cloth trimmed with white braid.” The pattern was available in five sizes, from two to six years and cost 7 ½ d. Or 15 cents. 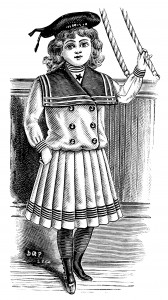 The second illustration features a Children’s Dress. A description from the magazine includes, “Light blue challis was the material used in the making of the pretty little dress shown in the accompanying illustration. The garment is charmingly trimmed with insertion and white all-over lace. A light blue surah silk sash conceals the joining of the waist and skirt.” The pattern was available in seven sizes, from three to nine years and cost 10 d. or 20 cents. 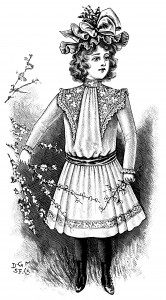 The images are from the July 1900 issue of The Designer magazine.

Girls Playing in the Snow