You are here: Home / Random Musings / It’s a Baby Robin!

According to the information I read on the internet, I wasn’t expecting to see a baby bird until approximately June 14th – two weeks after the last robin’s egg was laid. Ken peeked in the nest two days ago but not yesterday. He peeked again today and discovered one baby robin! 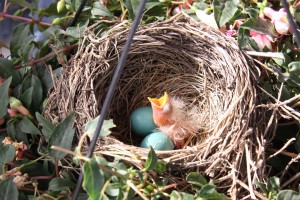 It’s so tiny, so helpless and so weak. It takes all its energy to raise its wobbly neck and raise its head for a few seconds before it needs to rest. 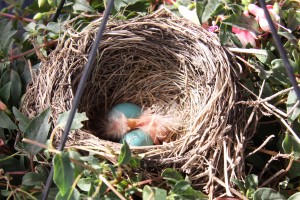 On another note: I’ve been busy preparing for and now enjoying the company of one of my boys and and his family. I expect to be back with another freebie for you on Tuesday or Wednesday of next week (June 12th or 13th).