This vintage storybook illustration is from an old, uncommon, story of Jack and the Beanstalk. In the story, Jack made a trade with an elf: an apple for a hatful of magic beans. Immediately after Jack planted the magic beans in his garden, a tall beanstalk grew; Jack and the elf climbed the beanstalk together. They found a deserted castle at the top of the beanstalk and Jack was free to help himself to the abandoned treasure. He divided the treasure with the elf and when he realized the treasure was uneven, Jack shared the larger portion with the elf. When Jack said to the elf, “This is not a reward, but a gift gratefully shared”, the elf became a beautiful princess who had been enchanted until such time as someone might offer her more than half of his fortune willingly and take her to the Land of the Beanstalk. They built a fine house where the Princess, Jack and his mother lived happily all their days. 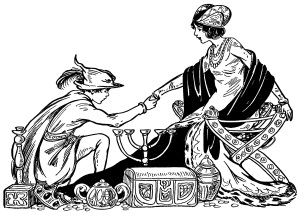 The image is from the March 1920 issue of Little Folks magazine.