Here is an illustration of a delicious looking cup of cocoa frappe. This serving of frappe has been set on a glass saucer that has been placed on a white doily. The image is from a vintage recipe booklet titled Choice Recipes by Miss Parloa and Other Noted Teachers, 1908. 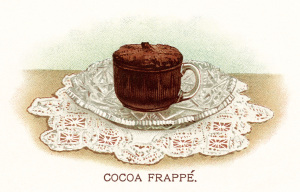 The recipe from the cookbook is as follows:

Mix half a pound of cocoa and three cupfuls of sugar; cook with two cupfuls of boiling water until smooth; add to three quarts and a half of milk scalded with cinnamon bark; cook for ten minutes. Beat in the beaten whites of two eggs mixed with a cupful of sugar, and a pint of whipped cream. Cool, flavor with vanilla extract, and freeze. Serve in cups. Garnish with whipped cream. ~ Janet McKenzie Hill

Turkey on a Platter Clipart